Let’s get this established right now, since we live in a time of “Biblical” flooding (by petty judgments): I’m not all cynicism and vinegar. I really do tend to watch the world in terms of the media it, preferably organically, produces.

And that’s why South Carolina Governor Nikki Haley makes me look towards those blue media skies ahead. She’s the dream client for a media guide gal like me, as she rounds corner after corner towards her next political incarnation.

Haley, of the novel-worthy backstory, has a political future so bright you need sunglasses and a server farm to store it all in.

Gov. Nikki Haley of SC helps repair a flood-damaged home in the Columbia, SC area, 10-15-15. Photo borrowed from the Post and Courier.

Here she is going about her latest piece of Most Pitiable State’s business. Governor Haley moves effortlessly from winning Volvo USA, crying (genuinely so) for victims of unspeakable crimes, to helping veterans clean-up after “historic” even “Biblical” flooding. And all the Haley-associated media is free, locally-sourced, 100% organic product.

Well, maybe there was a portion of strategic, long game planning associated with the above veteran’s home rebuild photo op. Whatever. It was a smart thing to do. Round-up the usual earned media suspects. Whir those shutters. Bang on those keyboards, people. Squirrel away the media harvest as it comes in.

Oh how I’d love to be along for the media-rich ride on Nikki’s next political adventure. Because that will indeed… print big.

UPDATE. May 5, 2010. This particular home was a total loss and torn down. Seems a new one is under way though, when I drove by in the heavy rains today along Peachtree Creek. Boy are people resilient or what?!

Post-flood. A tour of a flooded home, randomly chosen from many others just like it, along Hanover West Dr. in NW Atlanta, GA near Peachtree Creek.

Thanks to the homeowner, Bill Powell and his amazing attitude: “We’re gonna dry it out, clean it up, then we’re gonna jack it up.”

Thanks also to Jarred Opstad of Metro Furniture Restorations in Tucker, GA who took a moment to talk about the process of working on a seriously flooded home. A WaySouth Media, Inc. production. 9-23-09.

more about “Tour of a Flooded Home in NW Atlanta,…“, posted with vodpod 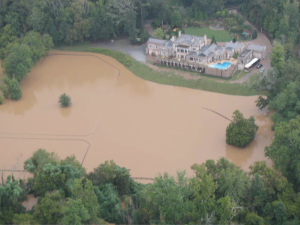 Just as the TV news stations will have “EVEN MORE” coverage throughout the day,  online communications gurus will continue to use Twitter throughout this ongoing natural disaster in Georgia.

Flooding in Atlanta: One Search To Bind Them All

About 6 a.m. Monday, Steve Burns, a freelance journalist near Atlanta, sent out a note on Twitter:

She followed up quickly with a note to a local TV outlet:

“@11AliveNews, please consider using the hashtag #atlflood in your Tweets! That way all the notices can be indexed/RSS’d. Tx!”

The tag set the tone for an organized, findable stream of aggregated content that helped Atlantans and their friends stay informed as the rain kept falling, killing at least 6 people, swamping interstates and causing major delays at the airport. The Georgia governor declared a state of emergency in 17 counties.

We’ve all read posts about how Twitter provides immediate coverage of earthquakes or bloody election fallout. But this moment showed how a social media tool enabled aggregation of all local news coverage through one search, quickly, in a large city, for breaking news.

Individuals shared links to stories from the established local news outlets quickly throughout the day. And a picture on Twitpic of flooding on Atlanta’s downtown connector received more than 60,000 views in about 10 hours.

Considering it a victory for untrained “citizen journalism” might be a bit misleading. Burns has newspaper experience from California, Georgia and Florida, and Daughters is a writer and corporate communication professional who worked for ABC News for six years. Also heavily involved was Tessa Horehled, a strategic marketer who advises companies about social media plans. Tweeting at @driveafastercar, she braved the rain with a video camera numerous times throughout the day from her neighborhood, and posted pictures late into the evening as a creek approached her front door.