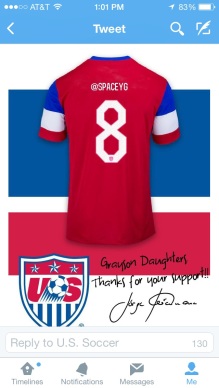 I find conversations from people engaged by mass-marketed team sports to be clichéd, hyperbolic, robotic and grossly uncreative. In other words, people talking about sports bore me to tears. Within 1-minute of someone talking about and/or watching sports I’ve pretty much left the room.

Then why would someone like me, who hasn’t watched or cared about 3-seconds of World Cup action, (almost) buy a U.S. Soccer team/franchise jersey?

Because the purchase of a U.S. Soccer jersey meant something to me. It spoke to my ego. A single picture of a customized soccer jersey fed my ego and my self-centeredness, along with my need for instant gratification.

The U.S. Soccer team jersey I almost bought was cute, in a patriotic red, white and blue. Best of all it was customized. On a mock-up photo, auto-generated on Twitter to get my attention, “my” jersey had my Twitter name (@SpaceyG) stamped across the back.

I wanted that thing. And to be mine, it was just a few more taps ‘n swipes away on my iPhone. An impulse sale was almost made in a mobile environment, something very hard to do, so it seems.  END_OF_DOCUMENT_TOKEN_TO_BE_REPLACED