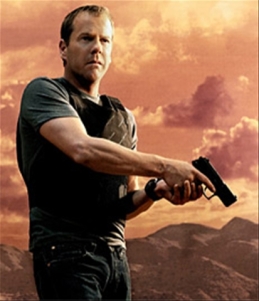 I was delighted as the next person to have 24 return to our TV sets last night, although being aware of the mighty-righty blowhards’ proclivity to the show, I could never really achieve full-drama-immersion status with last night’s 2-hour special the way I could with Last Enemy, a much finer-tuned thriller/mini-series sharing an inordinate amount of bad-guy cast members with 24, yet trumping 24 in intrigue, intelligence, suspense and chills. (But not explosions.)

Reason being, I was often mentally interrupted throughout last night’s 24 special with visions of Erick Erickson as Jack Bauer, leading a pack of lost boys out of violence-plagued Clayton County, Georgia. With Dick Williams in the role of trusted side-kick, sacrificing himself for the sake of the innocents on a landmine that, conveniently, took out not only himself, but Brian Nichols at the same time. Clayton Commissioner Eldrin Bell had a bit part as a bandaged-up woman fleeing yet another superfluous explosion of hardware. Jason Pye, alas, had his scene left on the cutting room floor.

As if any Georgia mighty-righty would ever be caught doing anything more than wringing their hands over fussy old-man issues such as who gets to marry whom because Jesus told him so.

If anyone is interested in (media for instance) real stories of real “lost boys” from the Sudan, All Saints’ church here in downtown Atlanta was instrumental in relieving and re-locating actual children from their war zones.