more about ““There Was No Crime Scene Tape Involv…“, posted with vodpod

Don’t want to wait for NBC’s ridiculously delayed coverage of the Olympics? There are plenty of places to get it now, get it live. The NYTimes Olympics blog has a list of what’s going on here. And Silicon Valley Insider has many tips and tricks on where to get it all live and off the NBC media plantation using the tubes.

“Exclusive” and “embargoed” – two words that need to be retired from the broadcasting milieu with the advent of live Internet streaming.

BONUS FEATURE: The NYTimes also has this nifty Olympics Events Tracker tool you can customize to optimize your many sporting options during The Games.

Interesting live-streamed chat from NBC cameraman and some documentary producer on “political stagecraft” and how the media do a special kind of visual propaganda with “the ranch” in Crawford.

Yep, everyone’s in on this game. Big Media, The White House, the people of Crawford.

The documentary producer cameraman Jim Long interviews here lifts the lid on the whole “production.” So they didn’t really saw the lady in half, eh?

When we hear those cries of “liberal media bias” it makes me wanna holler-laugh. Mostly such attacks are coming from clueless rubes who have absolutely no idea how hard travel journalists work their buns off, especially on a Presidential campaign. As if they have a moment’s time for a luxury like bias. It’s moreorless… shovel the product out as fast as you can. Raw and rough.

Most bloggers, scrappy as they are, could hardly stand the pace, especially when you add shooting, producing, editing and uploading video to the mix. Trust me, I go out on any kinda trail for longer than a day and I need a week to recover! (Local v-logger, Shelby Highsmith, being young and quite talented at what he does, has what it takes to keep going though. Amani too.)

Some younger guns are out there now on the campaign trail, having the exhaustive time of their lives. Here’s an interview from the CJR with a young woman “embed” from NBC News that gives you something of half-a-clue as to the pace and stamina required to keep-up with it all:

Once upon a time, we were out there by ourselves. It was only the embeds who were covering these events. Sometimes there was even very little local press. And we’d be the only ones there with video, with our cameras and tripods taping them. This was pretty consistent through Thanksgiving. And this was in Iowa and in New Hampshire. And we would drive ourselves from event to event. We got smart and finally decided to carpool. So you get to the event, film it, shoot it, something interesting happens, something compelling happens. You call your desk, upload it. The most you could ever send is about four minutes of at a time. You just did it on the road. You’re talking with your phone scrunched up against your shoulder so you can talk while you upload video. I’ve gotten a lot of speeding tickets. 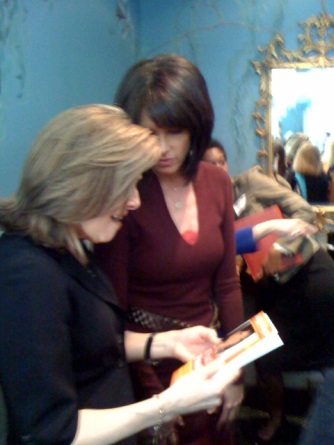 After a serious rant (see below) a good laugh is surely in order. This photo of Rush’s main squeeze Daryn Kagin showing Meredith Viera the juicy parts of Kagin’s book was taken at yesterday’s Atlanta Press Club luncheon for Ms. Viera.

Viera was wicked-funny and delightfully down to earth during her freewheelin’ chat-n-greet. If I wasn’t convinced that zoning in front of  The View causes brain cells to atrophy, I might actually tune-in to the thing.