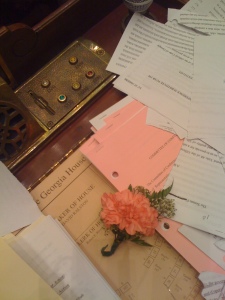 It’s the very last day of the Georgia General Assembly. Or Sine Die (*Without Day*) as it’s commonly referred to. Lots of live action online for you to follow along with. GPB’s Lawmakers, Georgia Public Broadcasting, provide live streams of the chambers. The House live cam/stream is here.

The best live blog for your participation (it takes in Tweets using the #GAsinedie and #GApol hashtags too) is here.

Also, there will be a 6pm rally at the Capitol today to protest HB87. The immigration bill that’s causing such a stink. It’s a gorgeous day out, and that rally will no doubt be very well attended.

Happy Sine Die! And a quickie video package I did for CBS-Atlanta for last year’s Sine Die is here.

Several new media things jump out today… Facebook is such an amazing tool for tracking legislation going through the legislative process. The Sunday Sales/Senate Bill 10 may or may not be before the Rules Committee today.  Advocates such as Rich Sullivan and co. are at the Georgia State Capitol now Tweeting and posting Facebook updates about this one bill’s progress.

Lobbyista, media, advocates and ordinary folk, take note! Could save tons on tasseled loafer polishing costs by not having to hoof it along the hallways of the Gold Dome. Watch and learn from the comfort of your connection.

Then again, just being at the Capitol on a busy day is exciting in itself. Go live and in person whenever you can. Just report back for us what is going on… as it happens. Social media tools make it very easy to do. (They’ve got great wi-fi at the Dome.)

Other quick note… when giving interviews to text-only outlets avoid passive language, such as Michael Bond’s here. While it’s earnest, and might work in a broadcast environment, it always prints bad.

Councilman Michael Julian Bond pointed out that Sandy Springs and DeKalb County have full government participation and the continual council snubs are “almost getting to the point where it is beginning to be offensive.”

One more… from what I hear, bloggers are already revolting on donating free content to @11AliveNews/@gannett‘s Where U Live project. Must give back, news farms! Must. Think of better ways to give back to the blogger (on-air time comes to mind), and you might get more better content from ’em.

Today is the deadline to nominate your fave Georgia journo/blogger now for The Atlanta Press Club 2010 awards. It’s easy to do.

That’s it for the morning. Make it a great use of new media day!

Whew! I made it through.