Atlanta, GA. 10-22-2009 — Reading the cover story in today’s AJC about social media and the Atlanta  mayoral race is like dealing with an ADD person – it’s wildly unfocused and all over the place. And not the least bit interested in hearing what you have to say. Except when it does. From the AJC:

And, while the 2009 race will be the city’s first in which social media play a major role, even campaign officials admit being uncertain whether they can turn Facebook friends and Twitter followers into voters. Facebook and Twitter accounts for the major candidates include everything from diehard supporters to spies from other campaigns to folks from far away locales with no connection to the campaign.

Grayson Daughters, a social media consultant in Atlanta, said the move to electronic communications in campaigns is so new no one knows what value it brings. Everybody knows they’ve got to do it, though.

“These are very, very powerful tools,” Daughters said. “These are databases they have compiled. Once these people are in your database, you have access to them 24/7.”

Will social media drive boots to the polls, so to speak, this year? We’ll know more on November 4th…  if we have some, any, exit polling data to give us an idea of what did motivate people to get up off their arses and go vote for a particular candidate in the Atlanta mayoral race of 2009.

It really would be genuinely super-fantastic to have some genuine data in regards to social media and politics. Some kinda science behind the wildly speculative and hypothetical ya-ya that surround social media use in southern politics right now.

Otherwise we’ll just have to slog through more rambling stories that leave us only scratching our heads in media bewilderment.

more about “Finally. A Political Ad Made In The 2…“, posted with vodpod 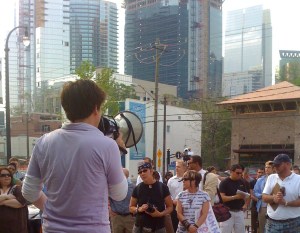 Ooops! I know they mean well at WSB-TV/Channel 2, but sometimes they’re just not able to keep up with all the latest developments happening in their own political backyard via social media. Neither can old-school kinda orgs like the Atlanta Police Foundation (APF).

Bless their hearts! It’s tough out here for the way-it-was-ers, isn’t it?

This is very funny because Kyle Keyser (@keyserformayor on Twitter) almost singlehandedly forced the issue of rampant crime in the City of Atlanta to the top of the media heap through his 10K + member org, Atlantans Together Against Crime, or ATAC:
http://atlantanstogether.org/

And the Atlanta Police Foundation/Channel 2 Sept. 13 debate is… a debate focused solely on public safety issues.

Contact Atlanta Police Foundation and ask that Kyle Keyser be included in the Sept. 13th mayoral reindeer games at:

On a gorgeous spring afternoon, WaySouth Media cams went to Atlanta City Council District 2’s councilperson’s, Kwanza Hall’s, re-election kickoff party. Inman Park neighborhood. Atlanta, Georgia. Sunday March 22, 2009. We asked people at the event what it was that they liked about Kwanza Hall. Their answers are on the vid!

more about "What Atlantans Like About Kwanza Hall", posted with vodpod

Well color me WRONG! All this time I’ve been blogging about what fuddy-duddys they were on the Georgia Gang. Then the Mostly Media roving iTeam snapped this shot of one of the Georgia Gang regulars sporting so much chrome Yours Truly had to avert mine eyes… at the kickoff party/fundraiser in Inman Park Sunday night, March 22, 2009, for the re-election campaign of social media-driven Atlanta councilperson, Kwanza Hall.

My my my! Guess who it is, win a prize. Prize to be determined by the Mostly Media party committee.

At a book signing for his latest book, Paranoid Nation:  The Real Story of the 2008 Fight for the Presidency, Matt Towery talks about why Atlanta is the model of political race relations. January, 28, 2009. Manuel’s Tavern, Atlanta, GA.

Specs: this video was shot with the Kodak EasyShare Z1275, a really crappy still camera, but not a bad video cam at all for a measly $120. refurbished (with shipping) to stick in one’s purse for the multimedia-ite on the go. Shoots HD video too. This snippet shot in 640X480 “normal” size though. Audio turned out much better’n I expected.

more about “Matt Towery Talks About Atlanta and P…“, posted with vodpod